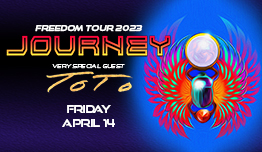 One of the most legendary rock bands of all time, JOURNEY, announces the continuation of their highly successful tour with the 50th Anniversary Celebration Freedom Tour 2023 featuring, very special guest TOTO. JOURNEY, Diamond-selling Rock & Roll Hall of Famers will take the stage in SPOKANE on Friday, April 14, 2023 with their catalog of global chart-topping hits, including "Don't Stop Believin”, "Any Way You Want It", "Faithfully", "Lights" and more.

Very special guest TOTO, who have collectively streamed more than 3.3 billion plays on Spotify alone based on hits including “Rosanna”, “Africa” and “Hold the Line”, will join JOURNEY on all Freedom Tour 2023 dates.