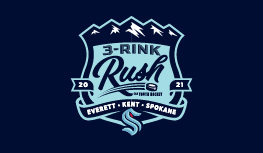 The Seattle Kraken will play their first ever NHL Preseason game at Spokane Veterans Memorial Arena on Sunday, September 26. The game will be one of three “home” games played by the expansion Kraken in their inaugural preseason with each being hosted by a WHL club in Washington.

“We are excited to host a Seattle Kraken pre-season game at the Spokane Arena as they embark on their inaugural season,” said Chiefs President Mark Miles. “The event will be a great opportunity for fans in Eastern Washington to see the Kraken play while also helping grow the game of hockey in our region. Thank you to the Kraken for their commitment to supporting hockey communities across the entire state.”

“This gives us an opportunity to partner with the WHL teams, celebrate hockey across our region and grow this beautiful game,” added Kraken CEO Tod Leiweke.

The Seattle Kraken will donate a portion of ticket revenue to One Roof Foundation with a goal of raising over $500,000 to expand youth access to hockey.

Tickets for the game will be sold by the Chiefs via TicketsWest at ticketswest.com beginning at noon on Friday, July 16. Chiefs ticket package holders will be provided access to an exclusive pre-sale.

“Offering our package holders access to a pre-sale was a priority for our organization as a ‘thank you’ for their continued support particularly over the past year,” Miles said. “This is a unique, once-in-a-lifetime chance to see an NHL franchise play its first game and our fans will be there.”

Chiefs ticket package holders will receive an email from TicketsWest on Monday with a unique code providing access to the pre-sale, which will open at 10 a.m. on July 13 and remain open until 10 p.m. on July 14. Fans who have not yet renewed or are interested in becoming a package holder for the first time can order via the Chiefs’ Ticket Office in-person at Spokane Arena or over-the-phone at 509-535-PUCK. Ticket package information is available here.

Tickets for the Kraken preseason game are based on availability. Tickets are first come, first served and reservation is unrelated to Chiefs ticket package seat location.