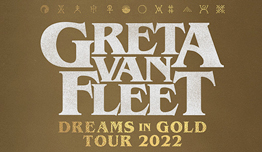 On the heels of their sold out spring 2022 Dreams in Gold Tour, Grammy-award winning rock band Greta Van Fleet have announced new arena shows for this fall including a date in Spokane at Spokane Arena on Friday, September 2!

There will be a Fan Presale on March 2 and a Local Venue Presale on March 3. Tickets go on sale to the general public on Friday, March 4 starting at 12pm HERE. Fans can sign up for the Fan Club presale at peacefularmy.com.