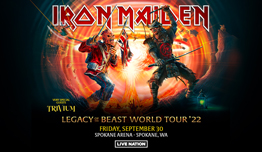 Heavy metal legends Iron Maiden are bringing their Legacy of the Beast World Tour with very special guests Trivium to the Spokane Arena on Friday, September 30, 2022!

Iron Maiden are an institution. Over the course of 46 years they have come to embody a spirit of fearless creative independence, ferocious dedication to their fans, and a cheerful indifference to their critics that’s won them a following that spans every culture, generation, and time-zone. A story of gritty determination and courageous defiance of the naysayers, theirs has been an adventure like no other, and with Senjutsu, their upcoming seventeenth album the marvellous adventure continues, and what a story it has been. With over 100 million record sales, more than 2000 live performances in 63* countries, tens of millions of fans and 16 going on 17 studio albums of unerring quality and power to their name, Iron Maiden have more than earned their proudly-held status as one of the most influential and revered rock bands of all time.

2018 and Maiden’s latest Legacy Of The Beast Tour is being hailed by fans and media alike as the most extravagant and visually stunningly live show of the band’s career to date. Both the production and the decades-spanning set-list of fan favourites and hits were inspired by their mobile phone game of the same name. The multi-themed concert opens with a replica Spitfire flying above the stage and progresses through a two-hour theatrical journey of ever-evolving interlocking stage sets with multiple incarnations of Eddie, pyrotechnics and special effects including muskets, claymores, flame throwers, a giant electrified crucifix, a noose, gallows and a gargantuan Icarus to name just a few.

Tickets for Iron Maiden's Legacy of the Beast World Tour live at the Spokane Arena go on sale to the general public on Friday, December 10 starting at 10am. Tickets will only be available online at TicketsWest.com; no sales at the box office, or over the phones.