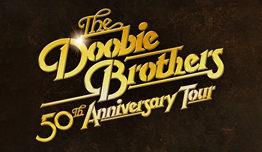 COVID Restrictions:
● Face coverings are required for all guests five and older

Four-time GRAMMY Award winners and Rock & Roll Hall of Fame nominees The Doobie Brothers are hitting the road to celebrate the 50th anniversary of the band’s founding. Tom Johnston, Michael McDonald, Pat Simmons and John McFee will be back on tour together for the first time in nearly 25 years.