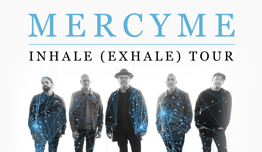 Effective November 15, 2021 per state order, all guests 12 years of age and older must show proof of full vaccination against COVID-19 OR proof of a negative FDA-approved molecular (e.g., PCR) or antigen COVID-19 test taken within 72 hours of the event. Rapid at-home tests do not meet these criteria. Please click HERE for additional info.

It continues to be a landmark time for MercyMe. They were named Billboard's Top Christian Artist of the 2010 decade, and in 2020 received their eighth American Music Award nomination. A major motion picture based on the life of frontman Bart Millard who wrote the mega-hit song "I Can Only Imagine” after the loss of his father, opened at a remarkable No. 3 at the box office on Mar. 16, 2018 (Lionsgate, Roadside Attractions). In conjunction with the movie release, Millard penned a memoir and the band released a collection of hits titled I Can Only Imagine – The Very Best Of MercyMe. In 2018 MercyMe was named Top Christian Artist at the Billboard Music Awards, was the top winner at the fan-fueled K-LOVE Fan Awards including a win for Artist of the Year, and was the GMA Dove Award Winner for Artist Of The Year.

Since their debut in 2001, the band has sold more than 9 million units in CD, single and DVD sales, garnered more than 48 No. 1 multi-format radio singles, and had four consecutive mainstream radio hits. MercyMe made history in 2014 as “I Can Only Imagine” surpassed 2 million digital downloads, making it the first song in Christian music to go platinum and double-platinum in the digital domain. The song has now gone has gone 4x platinum.

Don't miss MercyMe live at the Spokane Arena on Sunday, April 10, 2022 with special guests Rend Collective and Andrew Ripp! Tickets range from $25.75 to $152.00 and go on sale Friday, December 3 at 10am at TicketsWest.com.