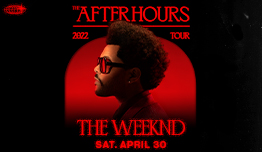 The Weeknd: The After Hours Tour

The Weeknd has announced new cities on his headline world tour, The After Hours Tour, following the release of his Billboard No. 1 album, After Hours.

The albums top hit “Blinding Lights” was 2020’s most-streamed track on Spotify and broke Billboard records for the most weeks spent in the top five and the top 10 among all titles in the chart's 62-year history. Prior to his tour kickoff, The Weeknd will perform live at the Superbowl LV halftime show on Sunday, February 7, 2021.

The After Hours Tour will showcase state of the art production and one of the most innovative stage designs to date, containing the most LED lights and video for an arena show. Produced by Live Nation, the tour will hit cities across the United States, Canada, the United Kingdom, Belgium, the Netherlands, Germany and France.